The porbeagle has a stocky body, with a dark-grey back and white belly, a pointed snout and a white patch on the rear of its dorsal fin. Porbeagles belong to a family of sharks called mackerel sharks, all of which are endothermic, or warm-blooded, and thus can thrive in cooler waters than other elasmobranchs. Porbeagles migrate long distances, and in the population in the Northeast Atlantic is thought to spend the spring and summer to shallower waters on the continental shelf but move northwards to overwinter in deep offshore waters. The porbeagle is viviparous, with females giving birth to small litters of between one and five ‘pups’.

The conservation status of the porbeagle is listed as vulnerable worldwide by the IUCN Red List, and its status on the Irish Red List for cartilaginous fish is listed as critically endangered. In the Northeast Atlantic, porbeagles have been heavily exploited by commercial fisheries, and their stocks are slow to recover due to their slow growth rate, low fecundity and late age at maturity.

The Marine Sportfish Tagging Programme tagged 133 porbeagle between 1970 and 2008 off the coast of Ireland. Despite the very low numbers tagged, there have been nine recaptures, all of which were more than 100km from their tagging location. One individual tagged off Co. Cork was recaptured 10 years later about 3,300km away off the coast of Newfoundland, which confirmed genetic evidence that there is mixing between porbeagle populations across the Atlantic Ocean. 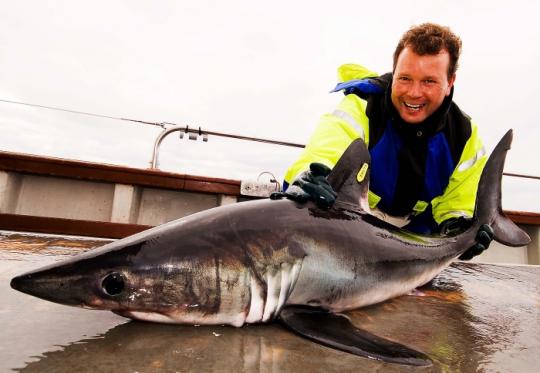 A brief description of the biology and ecology of blue shark (Prionace glauca) in Ireland.
Scroll to Top