How we help to move eels safely around the barriers found on some of Ireland's rivers so they can reach the sea.

Silver eels are adult eels ready to make their way down through river systems to start their journey towards the Sargasso Sea, south-east of Florida. 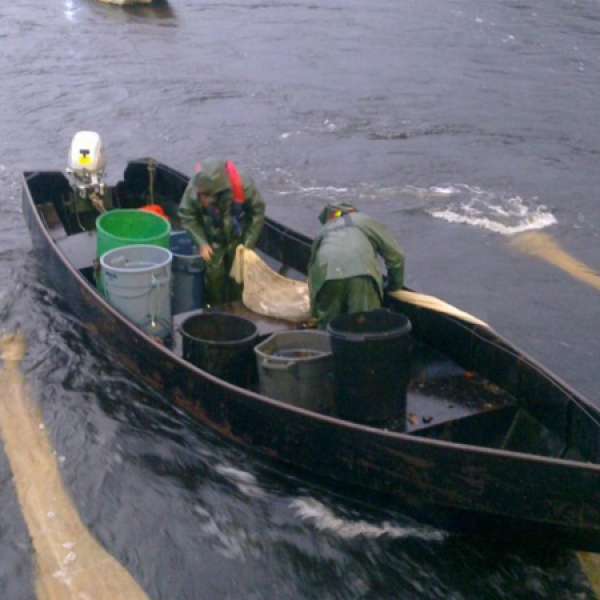 The trapping and transport of silver eels began in 2009. This programme runs along the Shannon and Erne river systems and is intended to increase the numbers of eels leaving our shores. It is sponsored by ESB to offset the damage caused to eel migration by their hydro generating schemes which were installed on the river Shannon and Erne.

Our role is to monitor this programme.

The trap and transport programme helps get eels safely around barriers on our rivers, such hydroelectric schemes which are dams used to divert water to large electric turbines on the Shannon and Erne systems.  Every year between September and March, traditional eel fishermen are allowed to catch migratory silver eels at specified locations upstream of the hydroelectric schemes.

Fishing for eels is targeted during the periods when eels are most likely migrating – typically during dark moonless nights, floods and when the wind direction is right. Once caught, the eels are transferred to large freshwater tanks which have oxygen bubbling through them. Then, they are moved by road and released downstream of the hydroelectric schemes.

We work to ensure that the fishermen are adhering to the rules and regulations of the programme. We also check on the health of the silver eels before they are transported by road. On the Shannon system, silver eels are released at Parteen Weir where once again our officers check on their condition.

The eels are then free to continue their onward migration journey to their spawning grounds, over 5000 km away in the Sargasso Sea.