Brown Trout killed as a result of discharge into the River Tolka.

In September 2018, we investigated a fish kill on the River Tolka in Co. Dublin reported by local anglers in the Mulhuddart area. Dead Brown Trout, Lamprey, Stoneloach and Minnow were noted in the Tolka Valley Park south of the village of Mulhuddart.

The river was a dark grey colour and there was a strong smell of sewage. Our investigating Environmental Officers walked upstream along the river bank to locate the source of pollution; a land drain full of raw sewage flowing into the River Tolka. On a field adjacent to the drain, the ground was ponded with vast amount of sewage discharging from a manhole. A series of water samples were collected at the site from the drain and in the river upstream and downstream of where the field drain discharged. 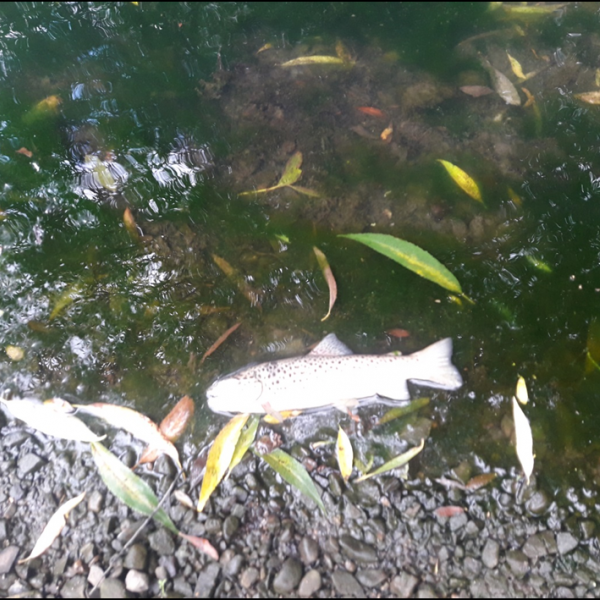 The local authority and the water utility company were notified, following which they dispatched the drainage division to locate the blockage in the sewer line. A subsequent inspection of the River Tolka downstream of the field drain revealed a significant fish kill (hundreds of dead fish) for a distance of 5 km downstream of the discharge point. The river bed downstream was thickly carpeted in sewage fungus.

The growth of sewage fungus over a section of river 2.9 km in length suggested that the discharge had been flowing for a number of days, as it takes a period of time for sewage fungus to grow.

Subsequently, the blockage from the sewer line was cleared and a large tree branch was removed from the line. The contaminated soil around the manhole was removed along with the remaining sewage in the field drain.

The discharge from the sewer and drain was considered to be "deleterious matter" and, as such, was contrary to Section 171 (1) (b) of the Fisheries Consolidation Acts, 1959, as amended. This section prohibits the placing of deleterious matter in watercourses.

The case was heard in Dublin District Court. Following extensive legal argument, the defendant pleaded guilty to the charge under section 171 (1)(b) of the Fisheries Consolidation Act, 1959 (as amended).

The presiding judge complimented our role in the protection of our fisheries resource and broader aquatic biological diversity. He stated that Dublin urban rivers are unique in character, often supporting healthy populations of fish and warranting careful protection for the good of all society.

The judge expressed the view that manholes in remote areas should be subject to periodic monitoring and commented that drones are routinely used to check for illegal dumping. He imposed a fine of €1,000. No application for costs was made on the basis that the defendant had agreed to make a contribution of €7,000 towards the costs incurred by us. Our routine inspection of the area continues.