Inland Fisheries Ireland investigates fish kill events with a view to addressing their causes and preventing their reoccurrence. Fish kills are often symptomatic of a problem in our environment, and it is in all our interests to understand why they happen so that we can put all measures in place to minimise the chances of them happening again. If you see fish in distress or if you observe dead fish in our surface waters, please help protect Ireland’s Inland Fisheries and contact our NEW number 0818 34 74 24 (open 24 hours a day/ 7 days a week)

Fish kills occur in most aquatic environments and are attributed to a wide variety of both natural and human-linked causes. Fish kills can involve small numbers of mortalities in localised areas or can impact large areas of water, killing thousands of fish in a short-lived catastrophic event. Some natural causes include extreme temperature fluctuations, poor condition / old age, predation impacts and disease. Human influenced fish kill events include discharges of sewage or other organic materials, herbicides, pesticides, industrial chemicals and fertilizers to surface waters. Point source discharges of chemicals and / or nutrients have often been shown to result in fish kill events. Point source pollution challenges however have reduced significantly over the last 30 years with improvements in environmental standards. Today, many human-influenced fish kills are associated with diffuse chronic pollution and frequently relate to dissolved oxygen problems in nutrient-rich surface water systems (a significant underlying water quality challenge in Ireland requiring urgent remediation). Climate-influenced events (for example prolonged drought conditions such as those experienced in 2018) that alter water volumes and influence water chemistry are likely to play a more significant role in fish mortality events into the future as climate disruption intensifies. 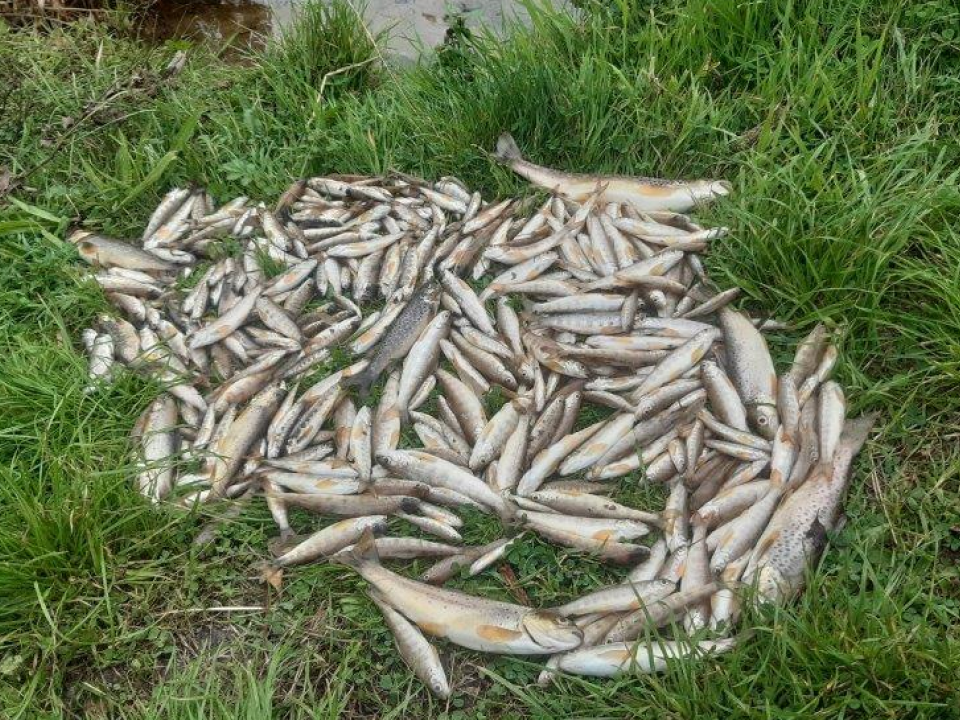 A common cause of fish kills, particularly in summer is the level of dissolved oxygen in water. Warm water holds less dissolved oxygen than cold water, so summer is the time when fish can have a hard time getting enough oxygen. Other organisms use oxygen too including the algae that grow in the summer and bacteria that degrade organic matter. During the day, the algae produce oxygen through photosynthesis, but at night, when photosynthesis stops, they and other organisms keep respiring, using up oxygen. So, on warm summer nights the dissolved-oxygen concentration sometimes drops too low for the fish, and a fish kill can occur. This can happen as a result of natural conditions but more often happens because of the addition by humans (inadventently or otherwise) of nutrients such as nitrogen and phosphorus to water systems. These nutrients ‘enrich’ our surface waters, supporting vigorous and excessive growth of vegetation, algae and microorganisms. With all this additional growth and respiration, there is much more competition for oxygen (which means less oxygen for fish). Times of higher water temperatures generally mean more challenging and difficult conditions for our fish populations in Ireland.

Our fish populations are an excellent ‘early warning system’ reflecting environmental quality and conditions more generally. Healthy fish populations in our surface waters provide strong reassurance that our environment is doing well. If our environment is in good condition, we have a critical building block in place for our own good health and wellbeing. When fish kills occur, they reflect something wrong in our environment. Inland Fisheries Ireland seeks to protect, conserve and manage our inland fisheries populations at all times and in so doing often addresses environmental problems that may not have been obvious if looking at the world around us through a different lens.

Chlorine is used in water treatment to make sure the water is free from germs and safe to drink. Chlorine is highly toxic to fish and changes their blood, making it less able to carry oxygen. Fish exposed to excess chlorine soon die due a to lack of oxygen.

Brown Trout killed as a result of discharge into the River Tolka.
Scroll to Top