The blue shark is a long and slender, with a dark blue back, bright blue sides and a white belly.  Blue sharks can reach over three meters in length and feed in open water on fish, squid, smaller sharks and even sea birds. Typically, blue sharks occur in large aggregations which are often size and sex segregated.  The blue sharks is viviparous, with females giving birth to large litters of 25 to over 100 ‘pups’, with an average of 35.

The blue shark is a long-distance migrant that is present in Irish waters usually from June to October, when it is taken by recreational anglers on a catch-and-release basis. The blue shark is one of Ireland’s largest and most valuable marine sport fishes.

The conservation status of the blue shark is listed as near threatened on the Irish Red List for cartilaginous fish and by the IUCN Red List. Although not widely targeted by commercial fisheries, blue shark are a major bycatch of fisheries for tuna and billfish.

The Marine Sportfish Tagging Programme tagged 19,309 blue sharks between 1970 and 2013 off the coast of Ireland, which accounts for 45% of all tagged fish since the beginning of the programme. Most of the blue sharks tagged off the Irish coast to date were small females up to 220cm in length. The blue shark is a true ocean wanderer: one fish tagged in Irish waters was recaptured only 274 days later off the coast of West Africa after an estimated cruise of 6,840km; another was recaptured 17 years after it was tagged. 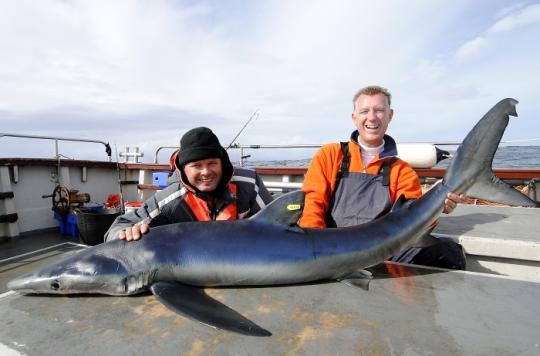