Atlantic bluefin tuna (Thunnus thynnus), the largest tuna in the world, frequent Irish coastal waters to feed during its annual migration through North Atlantic waters. This giant of the sea can reach lengths of 4m and 1500lbs. The bluefin is prized by sea anglers for its power and fighting ability and is a very valuable commercial species.

Building on the successes of the Tuna CHART (CatcH And Release Tagging) pilot programmes of 2019 and 2020, a bluefin tuna scientific data collection catch and release fishery for Ireland will operate in 2021, subject to Covid-19 restrictions. Depending on the successful operation and review of this year’s fishery, it is intended that a scientific catch and release fishery may also operate in 2022. 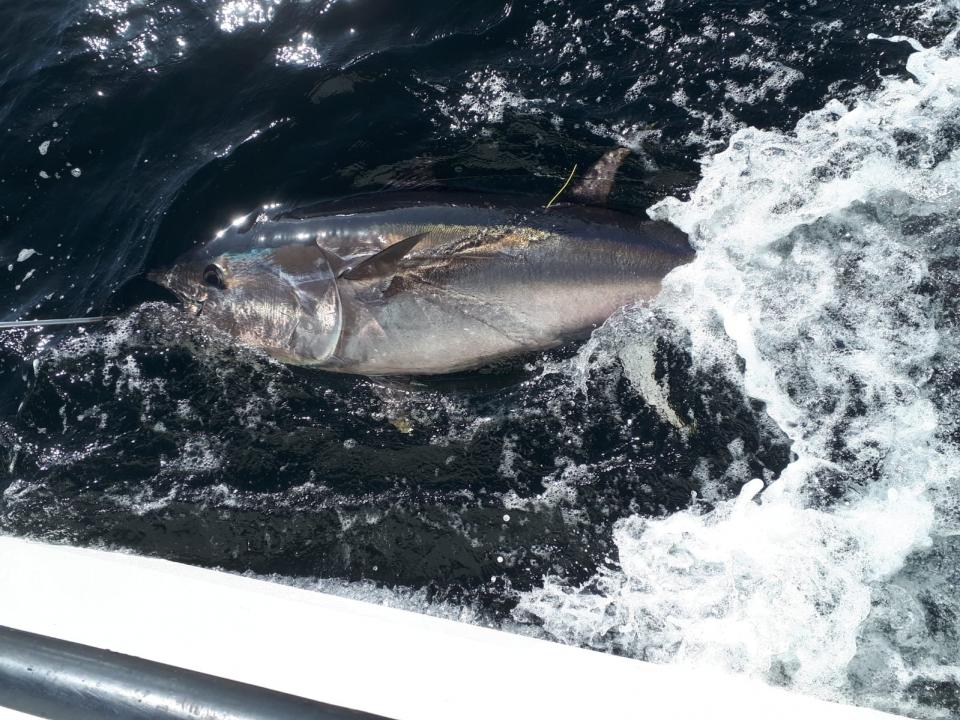 In 2021 a maximum of 25 authorisations may be granted to qualifying angling charter vessel skippers around the Irish coast. This scientific catch and release fishery will open on the 1st July and close on the 12th November. These dates are subject to compliance with government Covid-19 restrictions.

In 2020, the Tuna CHART programme authorised 22 charter skippers to operate a scientific fishery, in which anglers participated fully, to catch, tag and release bluefin tuna. These professional skippers were trained to tag, measure and record bluefin data.

Despite the limitations of the Covid-19 pandemic in 2020 and in compliance with government issued regulations, 685 bluefin tuna were caught, tagged and released around the Irish coast, a 230% increase in bluefin tagged on the previous year. The most productive sites were the North-West and the South coast, mainly the waters of the Cork coastline. As many as eleven bluefin were tagged on one angling trip, a new Irish record. The largest tuna tagged was 275cm, weighing an estimated 822lbs. All tuna were carefully handled subject to strict guidelines set by the Tuna CHART programme and all were released alive. Data from the tagging programme has been collated by the partnership for reporting to the International Commission for the Conservation of Atlantic Tuna (ICCAT).

A call for applications for the 2021 fishing season will be announced on 26th March 2021 and the last date for the receipt of a completed application will be 13:00 on the 9th of April.

The application window is now closed. Notifications regarding success or otherwise of applications will be sent out on the 23rd April 2021.

The core aspect of the Tuna CHART programme is the welfare and successful release of the bluefin tuna. Authorised skippers will be required to have high specification rods, reels and line in advance of the open season in order to ensure that the fish is brought alongside the vessel to be measured and tagged in the water in a timely manner. Data collection for scientific assessment is the primary purpose of this fishery and will continue to be a key requirement for skipper participation in this scientific catch-and-release fishery. Skippers will be required to collect data on every bluefin trip undertaken and each bluefin tuna they catch, tag and release and their angling and data recording expertise is an important part of the overall survey programme.

Anglers will have an opportunity to participate in this fishery and contribute to this important scientific study by chartering and fishing from authorised vessels only. Unauthorised vessels are not permitted to target or catch bluefin tuna and any unauthorised person found to be targeting bluefin tuna will be prosecuted. Applications for authorisations are only open to charter skippers.