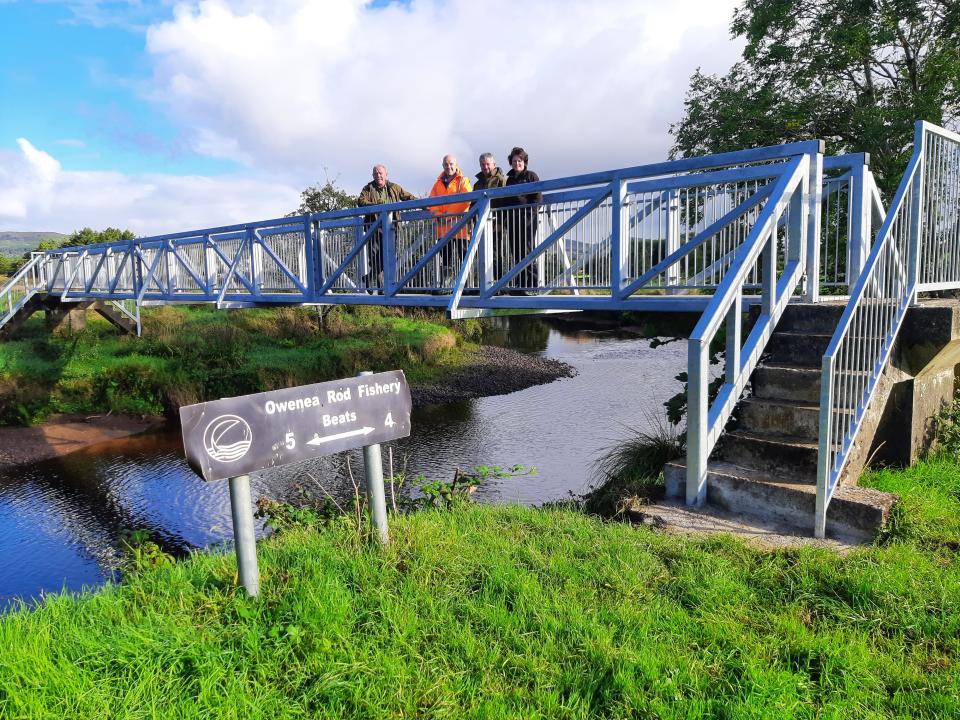 “Completion of this new footbridge is a vital element in the overall management and development of the Owenea salmon fishery and a welcome addition for angling access and the local community,” says Milton Matthews of Inland Fisheries Ireland.

Inland Fisheries Ireland, the state agency responsible for the conservation and protection of freshwater fish and habitats, and the development and promotion of angling, has opened a new footbridge over the Owenea River, near Glenties in County Donegal.

In a welcome boost for angling access on the Owenea fishery, the new steel footbridge was commissioned by Inland Fisheries Ireland to replace the former ‘Green Bridge’, which was constructed in the 1970s, but had fallen into disrepair.

The new steel footbridge is now officially open to anglers and the public.

Funded through the National Strategy for Angling Development, the new custom-designed footbridge will provide safe access to both banks of the Owenea fishery between Beats 4 and 5, near Glenties.

The Owenea fishery, which is directly managed by Inland Fisheries Ireland, remains one of the most productive salmon rivers in Co. Donegal. The fishery has a good run of salmon and sea trout as well as a resident stock of small brown trout and is popular with local anglers as well as visiting anglers, travelling from abroad.

Milton Matthews, the Director of the North- Western River Basin District with Inland Fisheries Ireland, announced the opening of the bridge, saying: “The Owenea fishery in Donegal is a popular destination for both local and visitor salmon anglers to the area. Installation of this new bridge is the culmination of over four years of work in terms of completion of the various safety, engineering and associated environmental reports and planning permission requirements needed. Inland Fisheries Ireland would like to acknowledge the contribution and support of various local landowners, contractors, Donegal County Council, local angling clubs and Community Development Groups, who have all contributed to and welcomed the successful delivery of this project.”

Inland Fisheries Ireland has an ongoing programme of maintenance and upgrading of angling access along the Owenea River, including the improvement of angling infrastructure such as stiles, footbridges and walkways.

Constructed in the 1970s, the Green Bridge was used extensively over the years by anglers, recreational walkers and local residents. However, following safety audits conducted by Inland Fisheries Ireland, Consultant Engineers were commissioned in 2021 to conduct a full examination of the structural integrity and suitability of the structure as a pedestrian footbridge. The report confirmed that the steelwork of the existing bridge was severely corroded and that it was no longer fit for purpose.

Although Inland Fisheries Ireland didn’t own or manage the Green Bridge, the state agency undertook responsibility for its removal and installation of a replacement galvanized footbridge to ensure safe access to both banks of the Owenea River for the angling community.

Before the old footbridge could be removed however, Inland Fisheries Ireland had to commission several reports and surveys, including Appropriate Assessment Screening, a Freshwater Pearl Mussel survey and Natura Impact Statement (NIS). Planning Permission was then sought through Donegal County Council for removal and replacement of the old Green Bridge with a new steel footbridge.

Following a public procurement process, Source Civil Ltd. was appointed as the contractor to remove the original Green Bridge and to prefabricate and install a new customed designed (W.D. Buchanan & Co Ltd) footbridge. This necessitated a temporary road closure and traffic diversion whilst the Green Bridge was removed and the new bridge was lifted into place (Quinn Crane Hire).

Matthews added: “Completion of this new footbridge is a vital element in the overall management and development of the Owenea salmon fishery and a welcome addition for angling access and the local community.”

The video provider requires that you accept marketing and statistics cookies in order to view this video. Click here to do so and save your preferences.

The new footbridge is located over the Owenea River, around 1.5km southwest of Glenties on the main N56 road leading to Donegal Town in the townland of Derries.

Pictures of ‘Green Bridge’ and new footbridge are available from Inland Fisheries Ireland by contacting the communications team below. 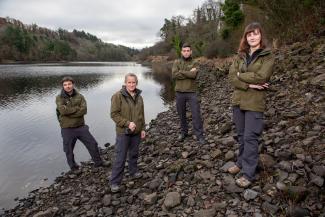